Perception Versus Reality in the Water…

Have you ever had a coach instruct you to lower your head? Kick from your hips? Or to lengthen out your body?

After you make all of the changes, does the coach come over again only to give the same critique?

At this point you push off the wall confused and likely frustrated.

But you did take their advice and make the changes, right?
At least you thought so…

I have found that two of the major challenges to improving swim form is the complete lack of visual or tactile feedback.

The oversimplification of “practice makes perfect” minimizes the conscious effort it actually takes to reach a level of perfection. Just putting in a hard effort doesn’t mean there is any effective change to the quality of a swimmers mechanics. The brain does a good job of mis-interpreting what is actually happening compared to what we feel we are doing in the water. Thinking or feeling you are in optimal positions doesn’t mean it is true.

We have all heard this statement before and at face value it makes sense. The saying implies that as long as we practice, we will eventually arrive at perfection. But ask the swimmer who’s been stuck in lane 4 having spent countless hours at swim practice (each season) if that is actually the case. Not all practice is created equal and it doesn’t always matter how hard you work physically.

So while practice might make perfect.
No matter how its done, practice makes permanent!

Why Does Our Brain Struggle with Spatial Awareness in the Water?

Humans are one of only three land based mammals that do not know how to swim intuitively. Although we are great at sinking (which isn’t particularly fun) we do not possess the natural body position and movements to swim.

It all comes down to control and comfort

When the water dictates what the swimmer must do; the water is in control. As in other parts of our lives, by sacrificing control, we also give up comfort. No one wants to be in a car that is hydroplaning on the highway, and the brain doesn’t want to be in an environment where air isn’t readily available while it is trying to avoid sinking.

What we do on land naturally (walking upright) does not translate to flotation and efficient  propulsion in the water. When our hips sink below our head in the water, the amygdala portion of the brain senses that we are sinking which is equated with drowning. Although the swimmer is focused on driving forward the brain wants to “get up” and fight the sinking sensation. Because most of the movements a swimmer makes are involuntary (instinct driven) it can become almost impossible to make deliberate improvements to the stroke on your own. The natural lack of balance in the water creates a situation that is hard to overcome by just putting in the laps.

By achieving balance in the water you regain control of your body which allows you to make voluntary and precise adjustments. 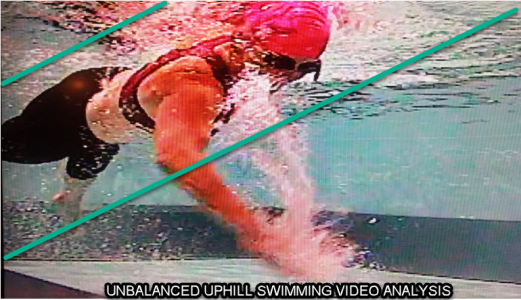 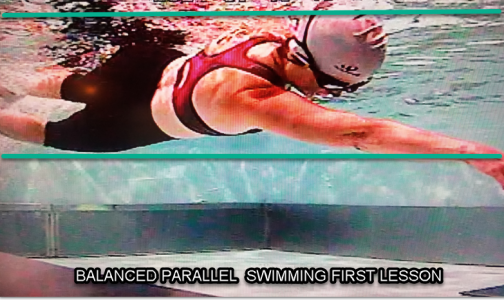 By achieving balance in the water you regain control

Learning how to achieve balance in the water is one of the (elusive) pillars that lead to swimming with control. Balance is elusive for many reasons but it is completely achievable for anyone. How you shape your body in the water leads to balance. It is a position that can be learned by anyone. The trick is to learn how to acquire balance before swimming whole stroke(s) and then how to maintain it once swimming. The lack of visual or tactile feedback makes the process almost impossible so we just rely on working harder and try to “stay up” in the water.

How Can I Make this Happen?

Hands on coaching solves the lack of tactile feedback
Having the opportunity to train in an endless pool being guided with hands on instruction gives the neuromuscular system one of the things it desperately wants in the water, immediate and tactile feedback in real time. A qualified coach can help guide an athlete into each position by providing anchor points and stability that land based mammals need. This is especially critical during the learning process.

Real time video solves the lack of visual feedback
By using above and below water video the swimmer can see if what they “felt” they were doing and what they actually did were the same thing. Video provides invaluable feedback and the gap between perception and reality starts to close until they become the same thing.

By using above and below water video cameras along with mirrors on the pool floor, critical, visual, observation is obtained. Through hands on coach led instruction athletes receive the tactile feedback that accelerates learning.

Fortunately your swim approach does not need to be “sink or swim”. Everyone can train in a way that engineers the “sinking” out of the process and find balance in the water.

Joe Petrush is recognized, credentialed leader in the multisport world. As a Total Immersion and USAT Level II coach Joe can help you learn to master technique while transcending barriers to improve swim performance.